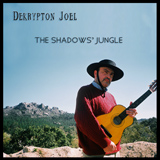 This is the 7th and last album from Dekrypton Joel, after 3 years and 3 months recording and composing 100 musics.

The end of a cycle of intensive recordings with a Boss BR8. Once again the electro-acoustic guitars were directly recorded by cable, without using microphones.
From now on Dekrypton Joel will keep on recording only to keep the old digital recorder alive.

The first chords make the tittle of this album: "The Shadows´Jungle" beggin with a little of repetitive minimalism with classic Spanish guitar and Flamenco music, not without a brief citation from The Beau Brummels, middle 60s, Californian Pop.

"Bang-Bang Mexico" musicaly ilustrates, with classic Spanish guitar, a Farwest gunfire, a soundtrack for a Western something comical.
Western Spaghetty is a receipt that D. Joel has already explored on his previous 5th album, released on this same netlabel (The Rocky Deserts´ Album) but now influenced by Al Di Meola, Mexican and Pop music.
Influences from AL Di Meola mark previous albums from D.J. (See notes links) and this one too: "Tom Anderson plays guitar (down in Juarez)" with also some influences from Mexican music and Pop.
From previous releases untill now Al Di Meola and John Mc.Laughlin have been the most visible influences for D. Joel.
Similar roots for "Ema Alho (Ema Garlic)", dedicated to a very nice supermarket working girl, Mexican, Pop with Bluesy tones and a Blues-Flamenco for an end, once again Al Di Meola and John Mc.Laughlin.

"Hunt for mate" is another example from D. J. Rock style, without much influences and with an improvised end, not premeditated, a delirious elongation regardless of what´s behind of it.
"Fresh wind landscape" brings some "In a silent way", from Miles Davies, citations but also pure D.J. Rock style.
"Luna de Blues", dedicated to the band from Madrid with similar name. Flamenco, Spanish classic guitar and Blues for another improvised end.
"Living on air and wind" is jazz, influenced by the album that has most influenced D. Joel: "Spaces" by Larry Corryel and John Mc.Laughlin.

"Going up the river´s road" was inspired in the riverine road that goes from Porto to Entre-os-Rios, again Larry Corryel and John Mc.Laughlin, there is a music named "Larry & John", from previous D.J. 5th album, that also makes a reference to this influences and another example of D.J. pure Rock style, as "Here´s what it turned out" with a little of Swing Manouche and Latin guitar solos.
"Into the Great beyond" is an expression extracted from a statement of Steven Tyler, found by D. Joel in a Aerosmith CD booklet.
Pure Pop-Rock from D. Joel, with passages influenced by John Mc.Laughlin and even a citation from "Follow your heart".
Beyond several connections with this music, there is a "F.Y.H." version, on 4th Dekrypton Joel album (El Guitri).

Psychedelic realms by a purist of the guitar: Dekrypton Joel